A health worker vaccinates a Buddhist monk sitting in front of a portrait of Bhutanese King Jigme Khesar Namgyel Wangchuck at a secondary school in Bhutan on March 27, the first day of the country’s vaccination campaign. Less than two weeks later, health officials said 93% of eligible adults had received their first dose of a COVID-19 vaccine. 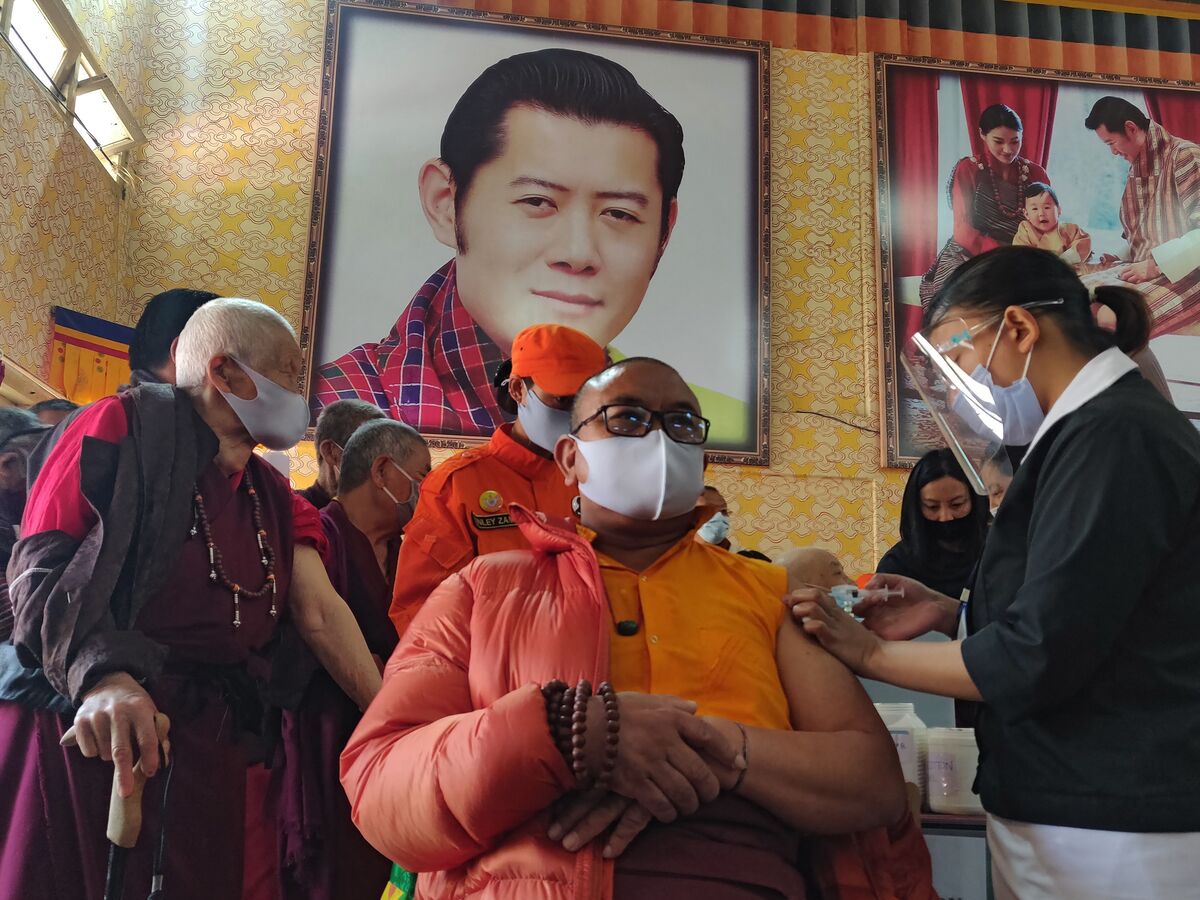 A health worker vaccinates a Buddhist monk sitting in front of a portrait of Bhutanese King Jigme Khesar Namgyel Wangchuck at a secondary school in Bhutan on March 27, the first day of the country’s vaccination campaign. Less than two weeks later, health officials said 93% of eligible adults had received their first dose of a COVID-19 vaccine.

It took less than two weeks for the Himalayan kingdom of Bhutan to vaccinate almost all of its eligible population.

The country’s vaccination campaign kicked off on March 27. By April 8, according to the Ministry of Health, 93% of adults had gotten their first dose. Officials said 472,139 people between ages 18 and 104 had been vaccinated as of that date, and they urged other eligible individuals to follow suit.

In a statement, Health Minister Dasho Dechen Wangmo described the campaign as a “sense of purpose that each of us is embracing to protect our country and the people we love.” She urged individuals to get vaccinated to protect themselves and their communities — as well as King Jigme Khesar Namgyel Wangchuck.

“His Majesty the King has shared thoughts about taking the vaccine only after every eligible person in the country received their shots safely,” she said. “All of us must come forward, so that we make way for His Majesty to receive the vaccine as soon as possible.”

Roughly 64% of Bhutan’s 735,553 residents have been vaccinated so far. That puts the nation’s rollout just behind that of Seychelles, which has vaccinated 66% of its population of nearly 100,000, according to The Associated Press.

Health officials said second doses will be administered after eight to 12 weeks. The country received 550,000 doses of the AstraZeneca vaccine, known locally as Covishield, in two batches in January and March from India, Daily Bhutan reported.

It launched its vaccination campaign at the end of last month to coincide with “auspicious dates in Buddhist astrology,” the AP said. On March 27, a 30-year-old bureaucrat became the country’s first COVID-19 vaccine recipient, followed by Prime Minister Lotay Tshering, his family members and various cabinet ministers.

“Given the infection rate of the disease, we need above 70 percent coverage in order to attain the desired herd immunity,” Tshering said in a statement. “With the overwhelming support of all Bhutanese, we will be one of the first countries to achieve that.”

The vaccines were distributed to more than 1,200 sites across the country using cold-chain storage that the AP says was used during earlier vaccination drives. Nearly 3,300 health workers and 4,400 citizen volunteers known as desuups were deployed across the country to help with the rollout, the Health Ministry said.

More than 85% of the country’s eligible adults had received their first dose within seven days, officials said. While the formal vaccination campaign was set to last only one week, shots were still available at certain health centers for people who had not received them, and individuals with mobility issues can sign up for home-based vaccinations until Tuesday.

State-owned newspaper Kuensel stated in an editorial that the country’s efforts to fight the coronavirus pandemic have been “exemplary right from the beginning,” thanks to leadership, front-line workers and what the paper describes as a cooperative public.

While noting it’s premature to celebrate before people have had their second doses, it said that the country’s size had certainly contributed to the vaccine’s successful rollout — and that this has implications for tackling other issues related to the economy, unemployment and technology.

“As we realise the advantage of our smallness from the vaccination programme, it is a lesson too valuable to not replicate in our other endeavours,” it concluded.

As of Monday, the country had recorded 921 cases and one death from COVID-19 since the start of the pandemic. Health officials said there will be no changes to public health restrictions until at least two weeks after the country completes a rollout of second-dose vaccinations, in two to three months.